I have set this up to auto post on Friday November 9, which will be the baby’s birthday.  She is incredibly stubborn and won’t move out of the frank breech position. Basically that means her head is up in my left ribs, her but is down, and her feet and hands are by her head. In the second picture you’ll see how crazy high up she is, and we’ll chat more about breech babies in a bit.  In the US (especially the area I am living in now) a natural breech delivery is not taught, all breech babies are born by cesarean. Of course she could turn before then, but today will be her birthday. 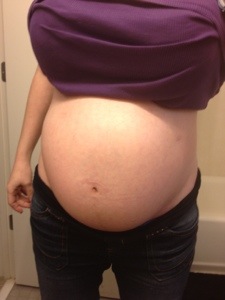 Here’s my big rounded out tummy at 39 weeks. Because she is breech she is pretty smashed in there. That results in a belly that measures smaller than what it should for this far along. Add that to the fact that I’m a small person and her daddy is not a huge man, and you get a small baby. She is on the small side for her age, but growing. Most baby bellies have “dropped” by now, meaning they settle downward as the baby settles into the pelvis to get ready for delivery. Not this child! She is staying right up with her head in my ribs and her feet poling out my right side (that lump on the left in the picture is her feet).

So now on to why a breech baby kind of sucks. As you can see in the photo above, she is pretty high up there. When I sit her head will actually come up over the bottom of my ribcage. This is actually quite painful and makes me pretty grumpy. Even normally with her head a bit lower her position has caused my ribcage to expand. This is great because my ribcage has jumped into an easier to fit range, I could wear a 28-30 band pretty easily right now. The picture above is the same 28J I was wearing before, the cups are just smaller and I have an extender for the band. The bra itself is too small (lifting center gore), a 30J would probably perfect. But this is the first time that I have not had a gap at the bottom of my bra cups because I can get the band tight enough. But you can also see how it digs into the top of my belly, which makes the extender necessary. If she wasn’t breech, who knows what size I’d be wearing right now.

So what comes next. Well obviously today is baby day. 🙂  From here is breastfeeding and body changes again. As my body has time to go back to normal my ribcage will probably shrink back down. My posts will hopefully change from pregnancy with implants to breastfeeding with implants (fingers crossed). I’ve finally gotten a little something to come out of these ballooning boobs, so my hope to breastfeed is still here. I’ll have a post about breast changes after delivery, engorgement and how it compares to early post op from breast implant placement surgery, and establishing breastfeeding. I’ll have a post about the bra I’ve chosen for a transition bra, the time between engorgement and established breastfeeding. And I should have a post about the Ewa Michalak nursing bra I ordered based on the recommendation to order one size up from your eight month breast measurement. And of course there may be some other random posts thrown in as I try to leave something written ahead for you guys.