I’m writing this post one day before 29 weeks. And I can honestly say that these next 11 weeks better go fast! As I’m sitting here writing I am literally getting something on my insides kicked or punched. Not in a gentle easy manner either!  I guess someone knows I’m writing about something that has to do with her, the question is if she likes it or not.

This photo was taken about a week and a half ago. I was all excited because it finally looks like I’ve got that round pregnant belly that I’ve been asking for. I had some bra stability (so I thought) and was able to wear bras comfortably. There didn’t seem to be many changes with my breasts as a whole, at least not anything noticeable. I’m carrying kind of high, but at this point it wasn’t a bother. I’ve got tighter abdominal muscles, so she is a bit compacted in there, but they’ve slowly started to give and relax creating that cute bump. Then things change.

Sorry for the poor quality bathroom picture. This is just a random one that I took to email to my mom a few days ago. You can even see one of my furkids sniffing around, along with a mess. So let’s just ignore please.  I know that these photos are from opposite sides, but this shows the biggest thing I wanted to point out. Look at how high my belly is. The baby has been growing up and not out for a while, but at this point it is starting to cause issues. Issues with things like eating, a full meal makes me feel sick. Issues with bra comfort. I’m measuring 28″ in the ribcage now, up 2″ from my normal 26. But that is all rib and no soft tissue.  The wires in some 28 band bras are killing me! Especially while sitting because my stomach will push up on them. This is similar to the issues women with a narrower underbust then waistline or what is sometimes referred to as a protruding waist.

So while the band size is great the wires are not. So I’ve taken to wearing a more stretchy Freya 28 band and I’ll probably have to grab an extender to try to relieve some of the pressure of the wires on my ribs. I hate sacrificing support, but right now comfort has got to come first. I am very worried about support because about 3 months before getting pregnant I had surgery to repair a complication with my implants. I had what is called bottoming out and some placement issues. I have layers and layers of permanent sutures along the sides and bottoms of both breasts, shaped kind of like a \_ _/. This wasn’t an easy surgery to recover from, so I’d really like to not have to do it again. So it is very important that my breasts (and the implants) stay supported as much as possible.

Now on to bra sizes. I thought I’d stabilized at a 28J. I had a few Curvy Kate 28JJ around for just in case or more size increase, but they are so wide in the wire that they are basically unwearable. I was wearing the CK Ella and Tease Me in 28J and the Panache Andorra in 28J, all of which have gotten small. I ordered a grab bag from Break Out Bra’s sale in a 28J and asked for Freya or Cleo. Both the Cleo Lucy and the Freya Faye that I received have more room in the cups then the 28Js I was wearing. So now I’m on to those. These boobs just seem to be getting bigger and bigger. I just don’t know what will be the final size verdict and what they will do with engorgement.

Their weight has definitely increased. I cannot go braless comfortably for a significant amount of time. Now there is a common misconception that implants won’t jiggle. Well they jiggled before and now they do even more. Walking around with out support is not my friend right now. Even soft bras that were OK before are not any more. I’m not sure how much weight they have gained, but these suckers are heavy!

So I’m going to leave you with a picture of my little hitchhiker (as deemed by a cashier at the pet store). This was taken a few weeks ago at just over 26 weeks. She wasn’t cooperating nicely, so we couldn’t get a full face picture. But, wow they can do some amazing things with ultrasound now!  So here’s my little girl for everyone to see. 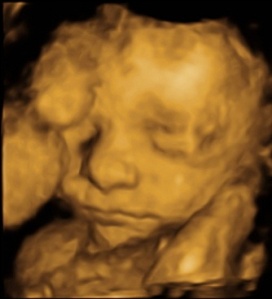